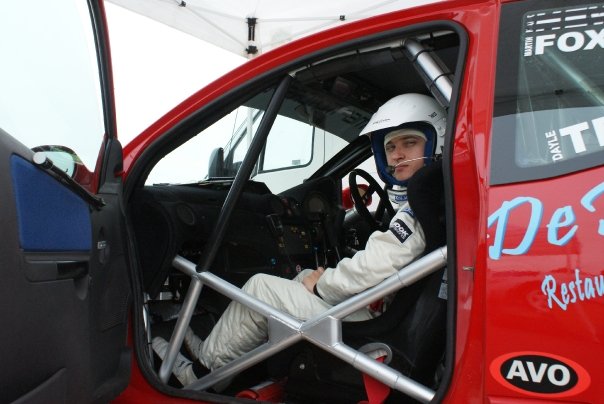 About Dayle and his Motorsport.

So you’d like to know a bit about me, Well I’m a 34-year-old petrol head from Wigan, England. My Grandparents brought up around Motorsport and I spent many a weekend from a very young age stood in the likes of Grizedale and Kielder Forest. From as young as two years old I've been a spectator at rallies and what makes me somewhat different from others is I was born with Visual Impairments Nystagmus, Ocular Albinism and let's also throw being short sighted into the mix. Having these conditions has always meant as much as I enjoy my Motorsport and Rallying I would never legally be able to drive a car. I decided at age 17 to start rally co-driving. Back in 2005 I applied and received my Rally co-driving licence and have since competed in over  100 events from single venues to multi-venue rallies and even featured on Sky Sports. I often get asked how do you do it? Well, I just get the maps/pace notes awfully close and what makes a good navigator is someone who can feel what the car is doing without actually looking up to see where you are.

Raising awareness of Nystagmus through Rallying

I'm currently trying to increase awareness of Nystagmus Eye condition; I know plenty of sufferers are told or feel they can't achieve certain things in life. I hate being told that I can't or won't be able to achieve certain things and one way or another I try and be an inspiration to other sufferers and prove people wrong. Please, could you help raise awareness of Nystagmus by sharing this page and if possible donate to my Nystagmus Motorsport Page on Just Giving.

Sitting in the drivers seat.

I'd planning on taking a reverse roll from being in the co-drivers seat and in my aid to raise awareness of Nystagmus eye condition I will be sitting in the driver's seat of a rally car and driving around a circuit. I've already been offered the use of a very nice Mk2 Escort and now I'm currently looking for a suitable venue where I could drive.

Past Motorsport Achievements for Dayle.

Can you help us?

We're currently on the lookout for any types of sponsorship or donations to help keep us rallying and raising awareness so please contact me HERE if you feel you can help. (Competition tyres are extremely expensive!) Cheers Dayle.