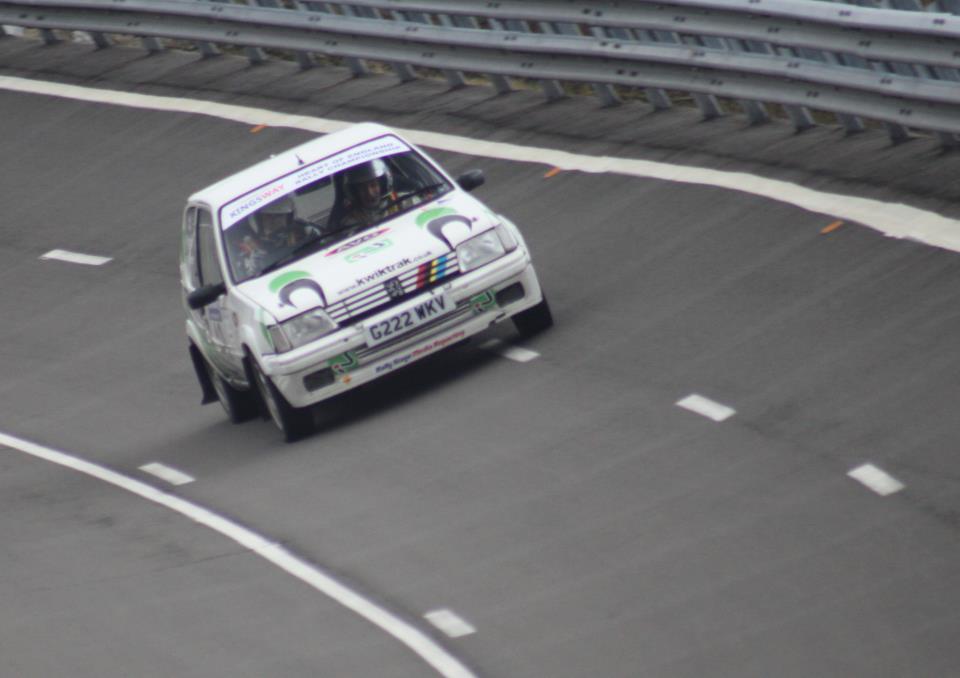 A great start to the dry morning instantly saw the pair lying 3rd in class in the rally but leading all the class A championship contenders, and that’s how it stayed all day.

However the day was not without some frights. On Stage 3, the car struck a straw bale quite hard sustaining some damage to the front right corner which was quickly repaired at service, but then the next stages saw the car suffer with a badly slipping clutch towards the end of the stage. Again, the team rectified this in Service and the car was on its way again without too much time lost.

At the start of stage 6 it had been raining for some time, but the pair decided to gamble and stay on dry tyres as there was no significant standing water. This paid off massively and the pair where 17 seconds quicker than their nearest championship class rival (Ian Hambleton/ Chris Cope, Peugeot 106), and then took a further 8 seconds off them on the final stage in full wet conditions now with wet tyres on the 205.

Hunter & Traynor where over the moon with this result as their car is a lot less powerful than their competitors and now lead their class in the Heart of England Championship. Class A was won overall on the rally by Graham Muter in his Mk2 Escort and the rally was won outright by Ben Burt in his Darrian T9.

The team now have to work hard to try and get a budget together for the next round of the championship at Down Ampney in May.

The next round of the AWMMC Heart of England Rally Championship sees Simon Hunter & Dayle Traynor return to the Mira Test facility near Hinckley in their Kwiktrak UK/ NW Design backed Peugeot 205!

The last time Simon visited Mira was on the Rally of the Midlands 2010 co driving in a Mitsubishi Evo when he suffered a 100mph accident so will be looking for a more successful visit this time. After the 1st round of the championship Simon & Dayle are lying 2nd in their class after a good result at Weston Park, however they are hoping for wet conditions at the next round.

When asked about his chances at Mira, Simon states: “Mira is a very fast place with big long straights and we have much less power than our competitors. If it rains then there’s a chance the deficit will be less but as always we’ll be pushing as hard as we can! Having said that, we can’t get mixed up in a battle for the event result, we have to think long term about the championship.”

The team’s car is a 1.3 Peugeot 205 Rallye, which originally was a  special edition from France released specifically for rallying. The car has the earlier engine which is a mere 1294cc but regularly >outperforms much more powerful and expensive machinery. AtWeston Park Simon & Dayle were looking at a finish of 24th overall out of 68 finishers with many higher powered 2.0l cars behind them until the car cut out on the last stage losing them over

The car is currently undergoing preparations with Peugeot expert
Andy Baker of AB Motorsport in Coventry and will be fighting fit for
the rally in April.