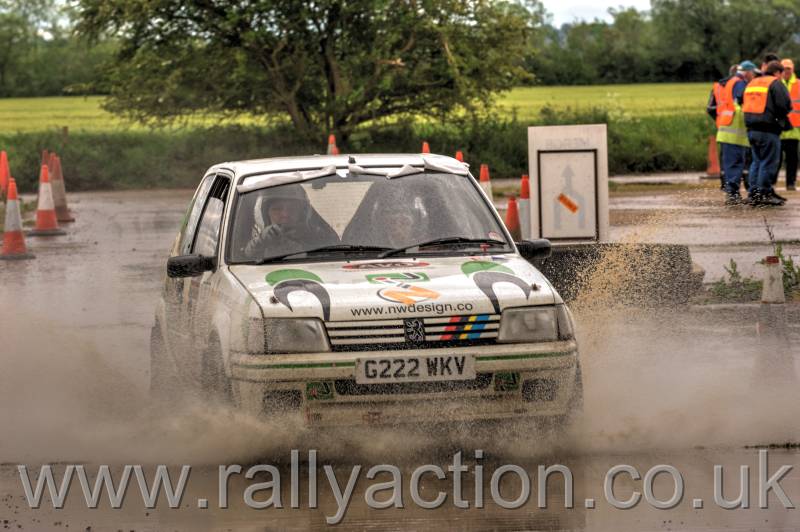 The next round for us and the heart of England Rally Championship is the Red Dragon IT Stages on the 24th of May at Down Ampney air field. This is the 3rd round of the championship and we're hoping for a good result as we missed the second round at Mira.

What more could a team want on the morning of the Red Dragon Stages Rally when it comes to a fast venue and underpowered car? RAIN and we got loads of it the morning of the 2014 Red Dragon Stages at Down Ampney Airfield. We got that much rain I’ve never seen as many cars parked up at the side of a stage as I did that day. The conditions were bad, slippy mud on concrete and aquaplaning puddles but that didn't stop us as they were the perfect conditions for us. That perfect that after 6 stages we were lying 10th overall in a 75bhp 205 Rallye that had been suffering fuelling issues since stage 3. Sadly as the day went on the bad weather left us and as the stages started to dry up the more powerful cars were able to get the traction down and begin to nip away at the time we took out of them earlier that morning. At the end of stage 10 we had finished 1st in the 1400 class winning by over 2 minutes and 14th overall from an entry of 74 cars. This had to be one of our best results yet and we can only presume if it had carried on raining throughout the day we’d have finished 8th overall! Red Dragon Stages Rally Results

Well we’ve stripped the cars carburettor down and already found foreign objects that really should be in there. Hopefully we’ll manage to get the car running correctly for the next round of the heart of England rally championship which is the Rally of the Midlands on the 20-21st June.