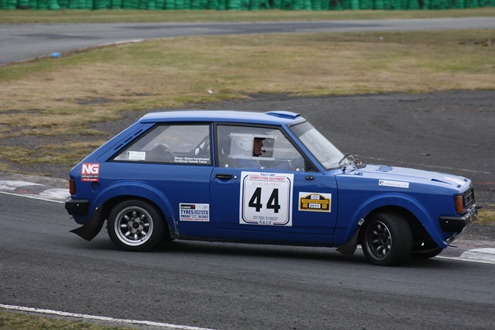 Talbot Sunbeam 2.0 Vauxhall Powered. Class 4. The day started out rather chilly, overcast but dry. We had initial problems when the car failed to start before SS1 resulting in fouled plugs due to the cold temperatures and still using webber carburettors. We replaced the plugs with a new set and heated them up with a blow lamp to aid starting. To our delight the car fired up first time since October 2012. Stage one was extremely slippy particularly due to cold tyres and the car being RWD, Weighing only 800kg’s yet pushing 265 bhp it can make for a handful. We finished the first stage unscathed with an overall result time of 4th fastest and second in class with a difference of only 3 seconds between us and the rally leader. After stage 2 we decided to replace the rubber on the back of the car as the tyres were getting way too warm and going off halfway through the stage which affected overall grip. We were forced to invest in some Dunlop X10’s which are a new developed tyre compound for 2013 which are a slightly harder compound to the X12 mediums we have previously ran. Stage 3 started and the car was all over the place and proved to be a right handful all day, even more so when the tyres are new and shiny. They often need a couple of miles to bed in, this put us off the pace for SS3 losing 5 seconds to the car we would be in competition with for most of the day. We also missed a gear which resulted in a 2 seconds loss, we fitted a new dog engagement gearbox for the event and you need to be brutal for the gears to engage which takes some getting used too. As the day went on we slowly made the seconds back that we’d lost on SS3 and still held 4th overall and first in class. We completed Stage 7 and 8 without any issues and calculated for our amusement the MPG we were getting, turned out to be an average of 4.5 Miles per gallon and we also have to run the expensive high RON fuel! Stage 9&10 weren’t as great, we got stuck behind a slower car on the stage merge and if my calculations are correct we lost an overall 12 seconds as apposed to us having a clear run. Stage 10 attempting to overtake the slower car we saw red and took the approach to a tightening bend way to fast, around 25mph too fast and the ended up taking the wrong racing line. It was inevitable what was to happen, as we came off the road bumped up the grass the only thing left was to keep the foot planted to the floor broad siding for the spectators to crash up the kerb and back on the road. Luckily after this little mishap the only thing damaged was a brand new minilite wheel that had a fight with a curb and our pride as we found out later it was recorded from 2 angles! The final Stage 11 and 12 we had to push on as we lost too much time on the previous stages and had now dropped to 8th overall and 2nd in Class. Sadly we had lost too much time to pull back 4th position and 1st in class and finished up 7th overall and second in class only 3 seconds behind the car in front. Overall it was a brilliant fun packed day and the car ran faultlessly, although the dog engagement box makes it a little handful but we gained another trophy for the cabinet.