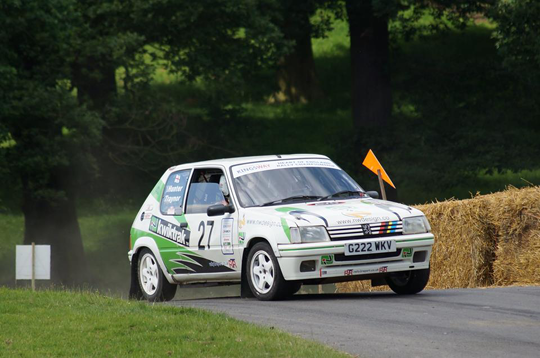 What can I say apart from what an eventful day we had on the Rally of the Midlands 2014! Our day was fraught with problems from the start, including a small fuel leak from the freshly rebuild carburettor and an over tightened nut that proved problematic to remove due to stripped threads.

Stage 1 and 2 were based at Mallory Park and ran the circuit in a clockwise direction, we had an awful time as we found out that something in the carburettor was not quite right. We believe the floats may have been set too low resulting in major fuel starvation on ANY right hand bends at full throttle. This really didn't help us at Mallory as we were running the circuit clockwise all day. It really was painful, just as we got the car going we'd loose all power and felt like we were grinding to a halt. This caused us to loose quite a substantial amount of time on the first few stages. After a couple of stages Simon managed to learn how to drive around the problem and we discovered that if we only half throttled the car on right hand bends we would be able to drive without the car bogging down.

These stages were based at Mira Testing facility and we managed to speed things up a little here, although not perfect we could still use the car but sadly  not 100%. The problems of fuel starvation on right hand bends was to be with us all day and it was something we just had to put up with.

We then ventured on the road section over to stages 5-6 which were held at Meryvale Hall. We completed the two stages without issues and in my opinion although only 1.3 miles long they were probably the most enjoyable as they were like a good old closed road lane stage.

We then headed back to service with quite a major knocking noise coming from the front of the car under heavy breaking. We discovered the bolt had come loose which holds the driveshaft to the hub causing the hub to move backwards resulting in the wheel nuts becoming loose! This was fixed and thankfully we didn't loose a wheel! After service we were to do the same loop again; Mallory, Mira and Merryvale. We set off and finished stages 7-8 without any major problems other than taking a rather heavy hit on the passenger side front wheel on a rumble strip that was like hitting  brick wall.

Stage 9 at Mira was fine but stage 10 became a little bit of a nightmare when we had a sudden drop of power and developed a major engine misfire 4 miles from the end of the stage.  Whether the right decision or not I decided that we should plod on and drive the course as the previous rally we had been suffering misfire issues that we had diagnosed to a loose HT lead that had been arcing out on the distributor and it would clear its self up like it did last time. Sadly this wasn't the case and at the end of the stage we discovered that the battery had come loose and had fallen down the back of the gearbox removing 2 HT leads with it! So for 4 miles we had been driving along on 2 cylinders rather than 4. We managed to get the battery back in its location but didn't have the correct tools to fasten it securely with the mounting clamp. Out came the good old zip ties and we made a temporary fix, I've got a nice big blister on my finger now too from when I looped the zip ties around the battery and under the battery tray. I managed to catch myself on the gearbox which after 28 competitive miles was bloody hot! We were currently winning the class until this point and we had lost a total of 1 minute and 58 seconds when compared to the previous stage.

Back to service where we fixed the battery in its place and had a fail safe (ratchet strap) just in case. It was time to get ready for the final 2 stages where we were told we were only 4 seconds behind the first car in our class. We'd been winning the class by over 2 minutes until the battery mishap at MIRA. The last 2 stages we drove the car to the very limits even with the fuel starvation problem and had managed to take the four seconds back. It turns our it wasn't 4 seconds we needed but in fact 8,  sadly we lost out on another class win by 4 seconds in total but still finished 2nd in class which wasn't bad considering a day fraught with problems.

Rally of the Midlands 2014 results

In the end we finished 22nd overall and the little Peugeot 205 Rallye won its 16th pot in a row. Not bad going really? I'm currently lying first registered co-driver in the Heart of England Rally Championship We're back to the drawing boards at the moment though as we need a serious think/overhaul of certain parts of the car as things have started to go wrong. View the Rally of the Midlands 2014 results here Photo by Paul Carey, hope he doesn't mind me using this here.