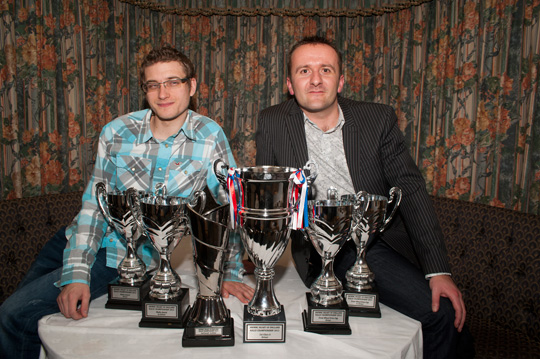 What a great year rallying we had in 2013, from what I though would be a couple of events turned out to be the full Heart of England Rally Championship along with a couple of other rallies to fill the gaps. We completed a total of 9 events with the most trophies I’ve ever won in 1 season! A total of 8 trophies our of 9 rallies and another 3 trophies waiting to be collected on the 10th January 2014 at the awards night for the Heart of England Championship. In the end, I finished 2nd Overall co-driver in the championship, first front wheel drive car and won the most publicised team (media award), not bad for a 27-year-old suffering from Nystagmus and Ocular Albinism ehh? It’s still not certain what we are going to do for 2014, like any sport particularly motorsport, cost is an issue and it's terribly expensive. We’re currently in two minds about what to do in 2014, do we go back and defend our class A win in the Heart of England Rally Championship or select fewer but larger events. I've always wanted to do the Manx rally over on the Isle of Mann but again it comes down to cost and time away from work but then again I’m not getting any younger and if the opportunity arrives you should grab it by the horns so to speak! Overall I’m proud of what we did this year and I’d still love to do my challenge of driving a rally car around a stage (none competitive of course) I just need to find a suitable venue. This will be done to help raise more awareness of the visual conditions I suffer from which are Nystagmus and Ocular Albinism, which mean I’m unable to drive a car as well as hinder day to day tasks.

Thanks for the support in 2013

I'd like to also thank Michael Davies of Rally Stage Media Reporting for all the media reports he submitted to various papers through our 2013 season and Steward Woodier of Rally Action Photography.

If you think you could help in 2014 however big or small then please feel free to contact me dayle[at]nwdesign.co any support would be much appreciated. Kind Regards Dayle.