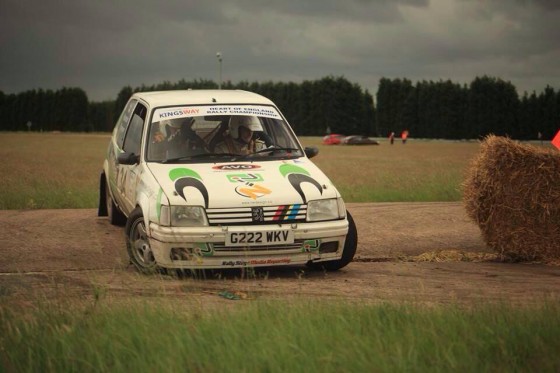 Saturday, saw round 4 of the Heart of England Rally Championship, back at the local venue of Mira Testing Facility  near Hinckley with Simon Hunter &amp; Dayle Traynor competing in  their Kwiktrak/ NW Design/ backed Peugeot 205.  The crew had a good result here back in April and set out keen to  do the same again. Stage 1 saw dry conditions and saw them  straight into the lead of the Heart of England Class (HOE) A  registered competitors.

Stage 2 was again dry and the crew consolidated their position.  After a sudden downpour whilst in service Hunter made a last  minute decision to change to wet weather tyres before stage 3,  however with the warm temperatures the track soon dried again  although not too much time was lost.

Again before stage 4 there was this time a lengthier period of rain  so the decision was made to stay on wets. Unbelievably when on  the start line, the rain stopped and again the track dried quickly.  The pair where not hampered too much and still set respectable  times. Before stage 5 the weather still looked unsettled but with a  comfy lead in the HOE class Hunter took the gamble and went  back to dry weather race tyres. This paid off and saw them  increase their margin. The last stage of the day was just over 16  miles long and the crew crossed the finish line over 3 minutes  ahead of their nearest HOE class rival.

Hunter and Traynor where also 3rd overall in the class on the rally  which was won by the unregistered Graham Muter in his Escort  Mk2 and they managed to finish 28th overall in arguably one of the least powerful cars in the rally!

Throughout the rally many other competitors went wrong on the complicated maps of Mira, but Dayle didn't miss a note. This is amazing considering how small and complicated the maps were and his visual impairment nystagmus. It just goes to show that good preparation on the day pays dividends.

A longer break now until mid August where round 5 see’s crews  travel to RAF Barkston Heath near Grantham where with another  strong finish Hunter and Traynor can seal the Class A title.